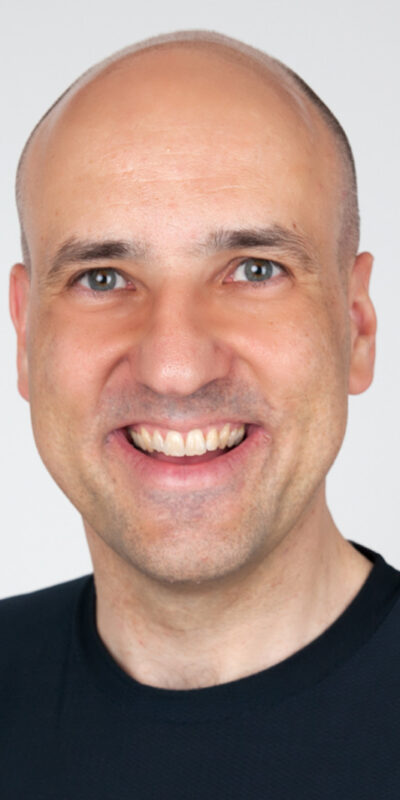 Reiner started his professional career studying psychology, all the while studying Weng Chun, the martial and healing arts of the South Shaolin Monastery, in parallel. After completing his master’ degree in psychology, he first opened a Weng Chun Kung Fu school. He soon felt he should also put his investment into his psychology degree to better use and sold his school after a year to move into a long and successful corporate career in PR, market research and marketing, earning an MBA part-time – but all the while staying connected to the world of martial arts.

Reiner married, had 2 children and his desire to get back into the world of movement grew stronger. This was when he first learned about Pilates in the early 2000s. Once inspired, Pilates never let go of him. Reiner plunged headlong into everything he could find about the method and its history and completed his training as a Pilates trainer for mat and equipment at the Pilates training institute Body Arts & Science International.

In his desire to deepen and exchange knowledge with as many devoted teachers as possible, Reiner founded the online forum pilates-contrology-forum on Facebook in 2011, involving over 12k Pilates instructors. The forum was closed in 2020, but he stills runs the large marketplace for used Pilates equipment, pilates-contrology-marketplace with over 18k members as a community service.

In 2012, Reiner took the leap and opened his studio pilates-powers in Toenisvorst, only 25km from Joseph Pilates’ birthplace Moenchengladbach in Germany. He constantly expanded his rooms, equipment and offer and has even been running his own studio Pilates training program since 2014.

Due to his strong interest in the history, development and different interpretations of each exercise, Reiner is very interested in connecting with teachers all around the Pilates world. Particularly noteworthy points in his career in this regard include 2014, where Kathy Corey appointed him to the Board of Directors of the Pilates Heritage Congress, regularly held in said Moenchengladbach. Since 2016, under her guidance, he has been studying the intricacies of the teaching methods of the various teachers directly trained by Joseph Pilates. A personal highlight to him was his appointment as a Pilates Master Teacher by Kathy Corey in July 2019. Further noteworthy to mention is November 2017 when he was given the great honor of being appointed by Brett Miller to his “Pilates Intel” team of experts. Since then, he has been writing articles for “Pilates Intel” on a regular basis. Additionally, since September 2018, Reiner has been a member of the three-member Certification Committee of the German Pilates Association and has been heading this committee since 2020. And, last but not least, he is very proud to have recently been appointed to the Board of Directors of the World Pilates Confederation in 2021.

He has published the following book and manuals: